$15 in Coupons for Disney’s G-Force Blu-ray 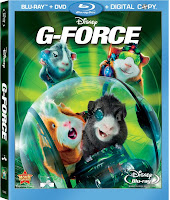 There’s a new $10/1 Disney G-Force Blu-ray coupon available here: $10 Internet Explorer coupon or $10 Firefox Coupon. Now it says it is for the blu-ray edition, but I have used these on regular DVD’s before and they didn’t beep.

Target has a  $5/1 Target Blu-ray coupon. If you use this you will have to buy the blu-ray version.

$10 off Tinker Bell & the Lost Treasure

Disney Movie Rewards members can score a Tinker Bell And the Lost Treasure on Disney Blu-ray combo pack $10/1 printable coupon! Just login to your Rewards account and enter code “gift”, then click on the banner to print your coupon. Make sure to hit your browser back button to print a total of 2 coupons.

Don’t forget that you can stack the $5/1 Blu-ray Target coupon with the $10 coupon for a total of $15 off! I’m guessing this will easily make for a sweet deal! Hopefully this combo pack will go on sale for $19.99–like some of the other Blu-ray combo packs have. If it does, then you’ll only pay $4.99! Yay!

Go here to print a $10 off coupon for Disney’s DVD Up.  It says its for the Blu-ray version but Walmart and sometimes Kmart will let you use these on the regular versions!  $14.86 at Walmart -$10 coupon = $5 Christmas Gift!

$5 Off Any Disney Blu-Ray Movie

New coupon to get $5 off any Disney Blu-ray here